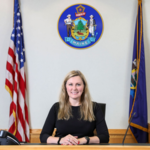 Raised in New Portland, Maine, Wenonah Wirick is an experienced trial lawyer specializing in family law and personal injury. Wenonah began her legal career as a paralegal in 1990 and was mentored by Attorney Michael Conley, one of Maine's premier trial attorneys, before earning her Juris Doctor from the University of Maine School of Law, from where she graduated Cum Laude, in 2002. Wenonah has dedicated her life and her career to her clients and the people of Maine navigate the complexities of the judicial system. A true community lawyer, she takes pride in solving problems of every shape and size for individuals seeking her help.  She has distinguished herself as an aggressive, detail oriented, and prepared litigator who truly cares about her clients' well-being.

Wenonah is committed to serving her clients in Midcoast and Central Maine and has been recognized by the Katahdin Council and the Maine Supreme Judicial Court for pro bono work in her community. She is also active in her community as a member of the RSU 12 school board. In her free time, Wenonah enjoys skiing, snowmobiling, and spending time with her family.

Thank you for contacting us. We will get back to you shortly.

Please complete all required fields below.